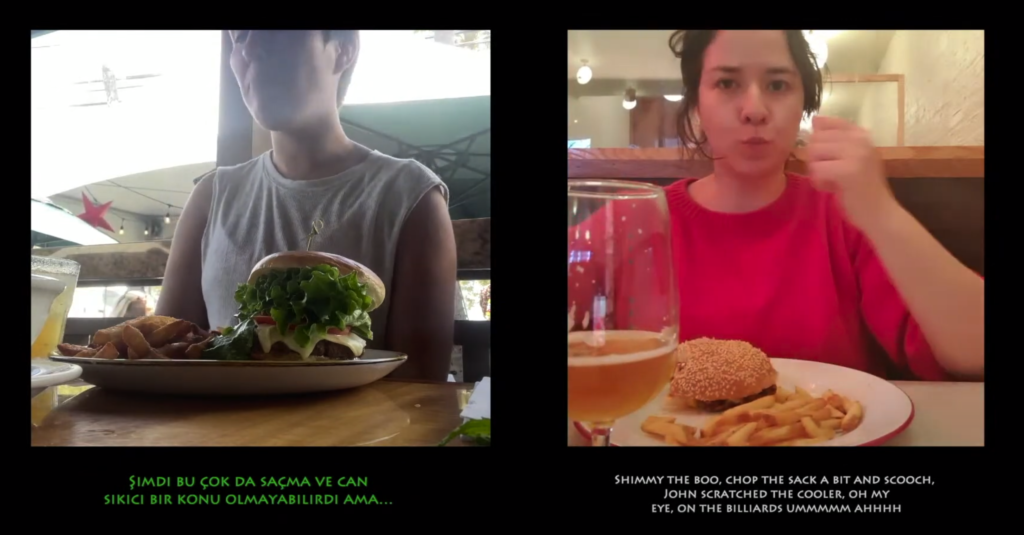 Cansu Tanrıkulu and Jessica Ackerley started their musical partnership at the beginning of 2022 through an online picker wheel that decided their fate was to become a duo and write strange songs about Gandolfini in Mutual Mentorship for Musician’s 4th Cohort lead by Jen Shyu and Sara Serpa. Collaborating between Berlin and Hawaii for months, Tanrıkulu and Ackerley could finally meet and work in person in New York during May 2022. This process of distant and in-person work ended up in a brand new band for the two multi-instrumentalists and inter-disciplinary creatives. The duo premiered their first composition/video work called “When In Doubt Stop, Drop and Gandolfini” on June 22nd, New York. Currently Tanrıkulu and Ackerley are recording their first album collaborating with a variety of guest artists, writing more songs about your favourite celebrities and booking shows in Europe, USA, Canada and Turkey as a duo.

You can watch their piece closing the night and an interview right after here (from 01:42:26):

During the past decade, Jessica Ackerley has established themselves on the Canadian and American music scenes as a unique and versatile guitarist, composer and bandleader. Born in Alberta, Canada, Jessica now resides in Honolulu after almost
decade of being located in New York City. They have worked alongside notable musicians such as Tyshawn Sorey, Daniel Carter, Marc Edwards, Luke Stewart, Patrick Shiroishi, and Jason Nazary, to name a few. Notable performance venues include John Zorn’s The Stone, The Metropolitan Museum of Art and The Blue Note, and tours both as a bandleader and side musician throughout Canada and the United States. Their musical palette is diverse, split between highly refined compositional structure, free improvisation, and Black American Music, as well as noise soundscapes derived from experimental rock, as explored in the collaborative band, ESSi.

In 2017 and 2019, Ackerley released their debut and sophomore albums as a bandleader – Coalesce and A New Kind of Water – to much acclaim, making critics’ year-end lists on Jazz Right Now, Avant Music News, Free Jazz Blog and Jazz Times Magazine. In 2019, they founded The Brink Guitar Festival, a four-day event featuring some of the most innovative players on the instrument such as Miles Okazaki, Elliott Sharp, Wendy Eisenberg, and Dan Lippel, among others. They has been commissioned by Adult Swim to compose and record a track for their 15-song Jazz compilation entitled New Jazz Century alongside other tracks by notable artists Matana Roberts, Anna Webber, and Jaimie Branch. As a recording artist, they have performed and released 1 albums as a side musician and bandleader to date. As an educator and mentor, they have lectured at Grant MacEwan University and University of Toronto, as well as guided many aspiring musicians in private study throughout the years. Jessica continuously expands their musical horizons with various projects, never setting boundaries or
compromising their limits as a guitarist and artist.

Scroll back to top
Professionally noisy